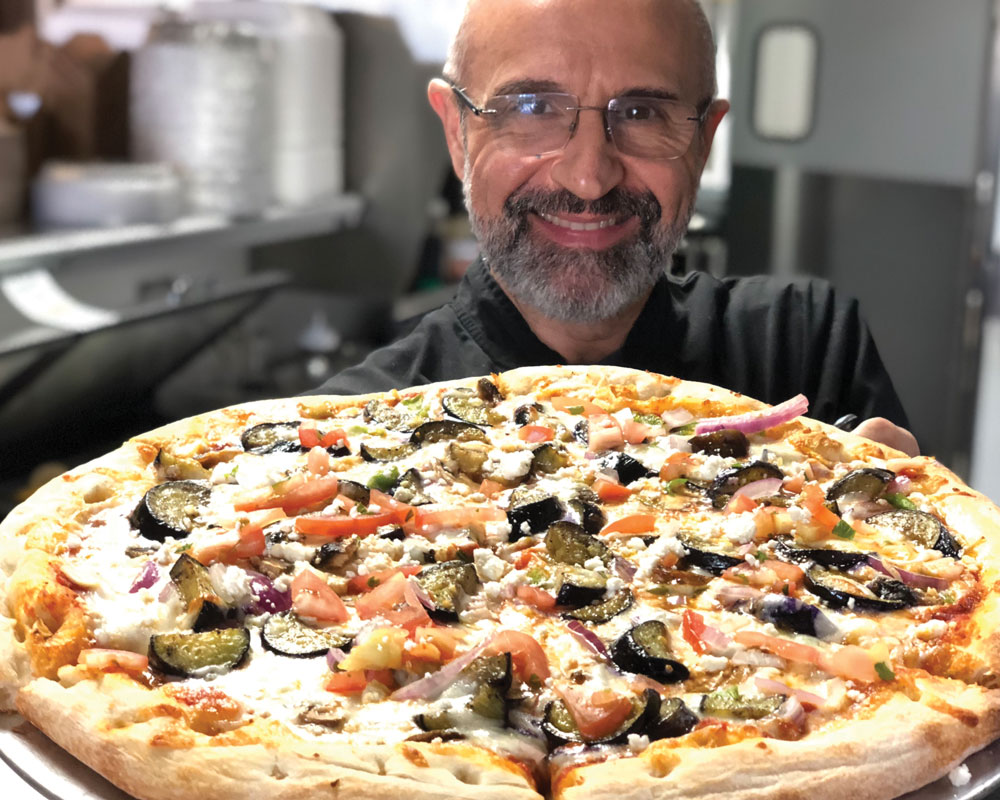 When Steve Bangos, a television visual and set designer and musician, traveled to Alaska for a gig, little did he know that visit would change his life. Years later, his Eureka Pizza Co., located in Yorba Linda, California, honors the landscape and culture of the 49th state.

Bangos’ journey toward running a successful pizzeria began with music. During a 17-year career working in the television industry, Bangos was also a practicing musician as a drummer in a Greek-oriented cover band. When his group was hired to play a gig in Anchorage, Alaska, he was so impressed at the sight of the city’s mountain vistas, he decided on the spot that he would live there one day. And that love at first sight later evolved into Eureka Pizza Co., an Alaska-themed pizzeria where employees make everyone feel like part of the family.

PMQ: Tell us about your introduction to Alaska.

Bangos: I discovered Alaska 27 years ago. I went as a musician, but I’m also an avid outdoorsman, and when we had the opportunity to play a gig in Anchorage, I said, “That sounds so cool and exotic.” I couldn’t wait to go. As soon as I got off the plane and saw the mountains, I said, “I’m going to live here. I don’t know how or when, but I’m going to live here.” I just fell in love with the state.

We went back once a year to play for a church venue. They would hire us to play for one night, and we would play five or six hours, and then I’d stick around for a couple days. I was so enamored, being there. I kind of meandered my way to some areas that were known for fishing. I came across a town called Seward and went there every year.

PMQ: How did Eureka Pizza Co. get started?

Bangos: In 2004, I got to know the owner of one of the small eateries I would frequent. He was older than I and was ready to retire. He wanted to sell his place, called The Greek Islands, a fast-casual pizza and deli spot. I thought I could turn this thing around. When the opportunity to purchase presented itself, I jumped on it. I told my wife, Patricia, “I feel really good about this. This is an environment I can see myself in.”

We established the restaurant in 2005. I kept the menu the way it was, but I embellished it greatly. I also brought a level of customer service that people in that town weren’t used to seeing. It was my home. I always tell people, “This is my home, so please make it yours.” After my first year, I rebranded it Eureka Pizza Co. I was already established, so it was just a name change. I also wanted to capture the Alaska theme and celebrate Alaskan history. Eureka is translated from Greek as “I have found it.” It’s used as an exclamation to celebrate a discovery, and it’s what a lot of the gold prospectors said. I was committed to serving hearty, delicious food in a very warm, friendly, rustic environment and, more importantly, to delivering premium hospitality.

The downside was that it was a very seasonal town. Year round, it’s about 3,000 people. But in the summer months, it swells to about 30,000 to 50,000 people, and they’re all tourists. So, for 120 days, you’re doing good numbers. You’re making a living. And for the other eight months, you work for free, and that gets old.

“I like to step away and greet people, sit down and meet with them at the appropriate time, provide that personal, one-on-one touch. Employees see that, and now I see my front-line people going around checking on everyone, making sure everything is OK. ”
— Steve Bangos, Eureka Pizza Co.

PMQ: How did you end up in California?

Coming from Alaska to Southern California was a game-changing move. Coming down here, I didn’t know anything about the competition, and I had to do a lot of research. I knew that in order to do this, I had to bring everything I had learned, everything I’d done successfully in Alaska. It couldn’t just be a good place to eat; it needed to be unique. Yorba Linda is a big market. I have 60,000 people in my backyard, which borders another 60,000. It’s a large demographic.

I decided to embrace the Alaskan theme—very warm and rustic. I designed every square inch of my store. We had the place gutted. That’s where my creative background came in handy, because I was an established set designer in television. I even wrapped my brand around the Alaskan Brewing Company, which is a 30-year-old craft brewing company out of Juneau. In six months, we were their No. 1 account in California in tap sales. Having Alaskan beer fits into our theme. It really stands out as being very different. I love it when tourists come in and share their Alaska stories. It’s a little foreign to some people, but no one really questions it.

PMQ: Tell us about your menu.

Bangos: Our menu is a hybrid. I’m not competing with other eateries that have a similar menu. We’re of Greek descent, so I wanted to encompass Mediterranean-influenced recipes and still celebrate New York-style thin-crust pizza (my parents were from New York) in a very rustic, warm dining environment. The whole package seems to work; its uniqueness draws people. People in Alaska still follow me, and many of them wish I was still there. But it was impossible for me to manage two stores 3,200 miles apart.

PMQ: How does your artistic and design background influence your menu?

Bangos: Coming from a creative background, I treat every plate like a canvas—every single dish, whether it’s a salad or a pizza, spaghetti, pasta or a stromboli. I want everything to be the Rembrandt of food. I know it’s going to taste wonderful, but I also want it to be so appealing to the eye that customers’ first impression is, “Wow.”

PMQ: You have a lot of great videos on your Facebook page. Tell us about the inspiration for those.

Bangos: On Instagram, I see a lot of pretty pictures of food. I wanted my videos to be more personal than that. It’s so important to connect to your customers so they know you. People go to a place because they know the food is good. But I also wanted them to know who is making the food, in an entertaining format. I also knew that no one in this market did anything like that. In a nutshell, it was an invitation for people to know me and what I’m all about. I’m not afraid to share what I’m doing, because I want customers to know what they’re eating.

The response has been really great. It’s so gratifying when customers come in and say, “I saw that video of the Greek Village Spaghetti. Can you make that for me?” My background in the world of entertainment and hospitality helps my confidence. One of my crew members, who is good at videography, shot them on my iPhone X, and my 15-year-old son, who is into video production, put the videos together using iMovie. It’s just amazing what you can come up with when you tap into the resources that you already have. 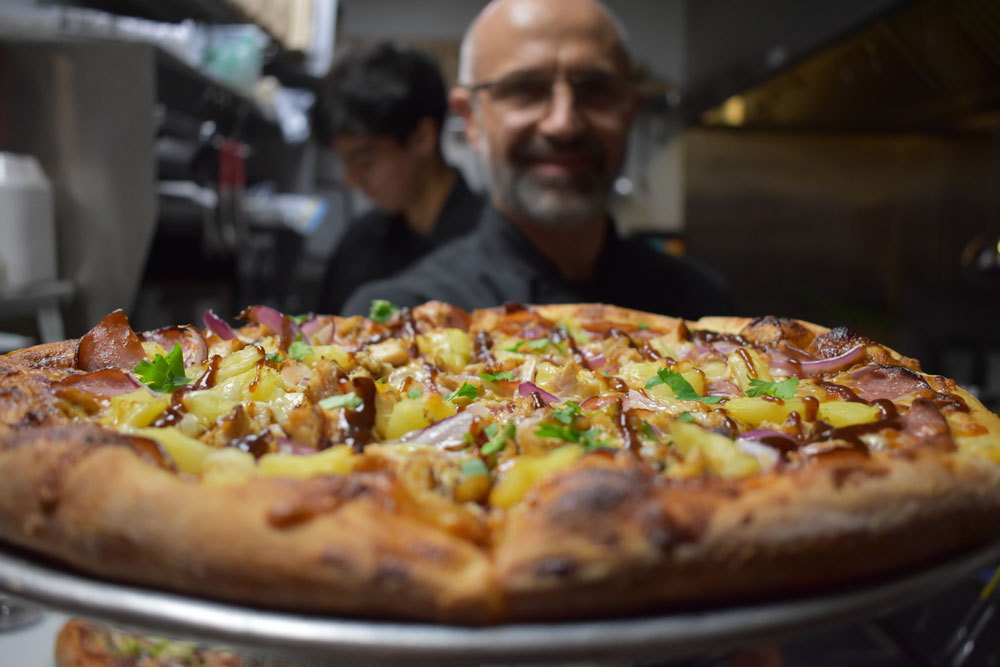 PMQ: Tell us about your management style.

Bangos: You can only lead as well as you serve, so I’m in the trenches with my employees. I call them co-workers, because I work right with them. I hand-pick all of them. Customer service is really important, so I look at character. I don’t care how long your resume is or how many places you’ve worked; if you’re rich in character, you can be taught. I look for excitement and enthusiasm, an “I can’t wait to do this” type of attitude. When you get those diamonds in the rough, you want to groom them. You want to exemplify what makes your business a success.

Every customer who walks through that door is credible, and they are responsible for your success, whether they are buying a slice of pizza or an $800 catering order. They are helping you keep the lights on. The words “thank you” can never be said enough. The customer experience starts when they walk through my door. Are they welcomed? Are they greeted properly? We cross-train. When you stop reinforcing and assume your employees are going to know everything, they’re not going to get it.

As for me, I like to step away and greet people, sit down and meet with them at the appropriate time, provide that personal, one-on-one touch. Employees see that, and now I see my front-line people going around checking on everyone, making sure everything is OK. Our repeat customers like the fact that they feel greeted. When they are here, they’ve got to feel like family. That’s what keeps them coming back.

PMQ: What do you see in the future for your pizzeria?

Bangos: I’m very passionate about what I’m doing. I’m in it to win it. We’re only two years old in this ZIP code, and coming here to Yorba Linda was a challenge. I think I can confidently say I overcame many challenges, but I’m not out of the woods yet.