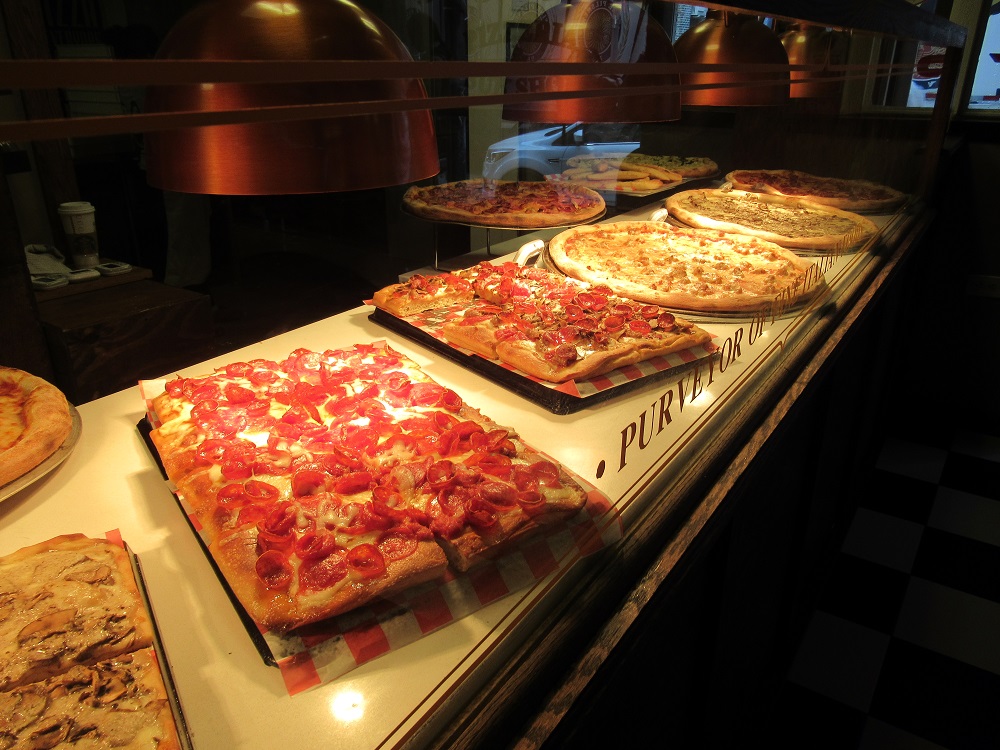 No matter how many times I travel to Chicago, I always find something new to love about the Windy City.

In the past, my trips to Chicago have usually been tied to a strict work schedule that involves days spent at the National Restaurant Association (NRA) Show and nights filled with marathon eating tours to as many restaurants and pizzerias as my schedule will allow.

This past July, I was able to fully immerse myself in the city when my husband Benjy and I chose Chicago as the locale of our fourth wedding anniversary celebration.

We relished in popular tourist draws, such as Millennial Park, the Bean, a river cruise, fireworks at Navy Pier, and more.

After dropping off our bags, one of our first stops was to Lou Malnati’s. I had never been to Malnati’s on any of my previous journeys to Chicago due to long lines and time constraints. This time, even though it was a weeknight, the wait was still nearly an hour long.

We were relieved to find that the pizzeria uses an app that allowed us to put in our cell number and periodically check back regarding where we were in line. Plus, because deep dish Chicago-style pizza can take up to 45 minutes to bake, we were given the option to place our pizza order when we put in our name. So, the pizza was ready shortly after we sat down. Consider us impressed! 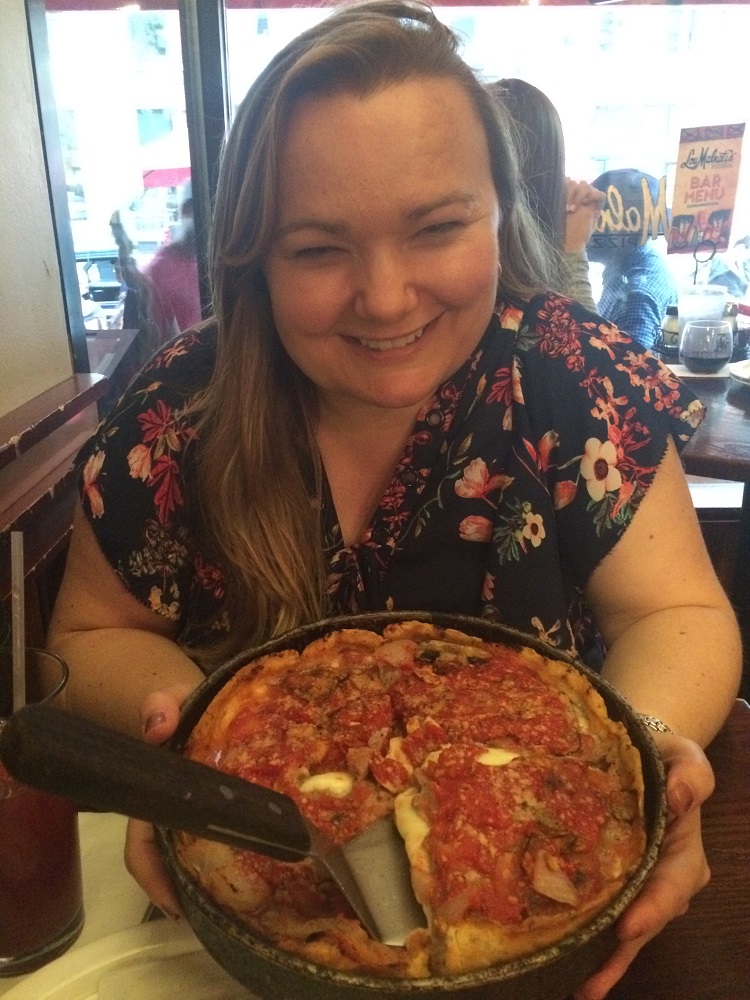 We ordered the Malnati Chicago Classic, which was the perfect kick off to our visit. This deep-dish pizza starts with Malnati’s Buttercrust, and is topped with sausage, extra cheese and vine-ripened tomato sauce.

I think one of the most misunderstood things about Chicago deep-dish pizza is the thickness of its crust. The crust itself is pretty thin, in reality. It’s the fact that the crust is pressed up the sides of the pan and the toppings fill the center that makes the pie appear to be a big, deep, thick, pie.

Don’t get me wrong, it’s still very difficult to eat more than one slice of Chicago deep dish pizza, but it’s not due to a thick crust. It’s because of such a rich pizza. Think about it. Butter in the pan, butter in the crust. A giant circular disc of sausage (traditionally) covering the entire pizza, then cheese and sauce. It’s a gut buster, for sure!

At Malnati’s we still had enough room leftover for the deep-dish cookie dessert, though. There’s always a tiny bit of room for dessert, right?

Several curious Chicagoans sitting around us asked why we were taking so many photos of our pizza, and offered up their own suggestions about additional pizzerias, steakhouses, burger joints and attractions we should see during our stay. I love Chicago!

After our pizza feast, we needed a couple of days off. We walked close to 20 miles, touring some trending food halls and participating in an afternoon tea before rejoining the pizza party.

This time, we met up with Jonathan Porter, founder and operator of Chicago Pizza Tours. This is the third time I’ve met up with Jon for a pizza adventure, and Benjy was more than happy to partake in the pizza eating. Jon wanted to show us a different side of Chicago, so we went on his Big Shoulders tour, which visits pizzerias that serve deep-dish pizza as well as locations with regional styles that are becoming more popular in Chicago. Between pizza fill-ups, Jon filled us with knowledge about Chicago and pizza’s history. 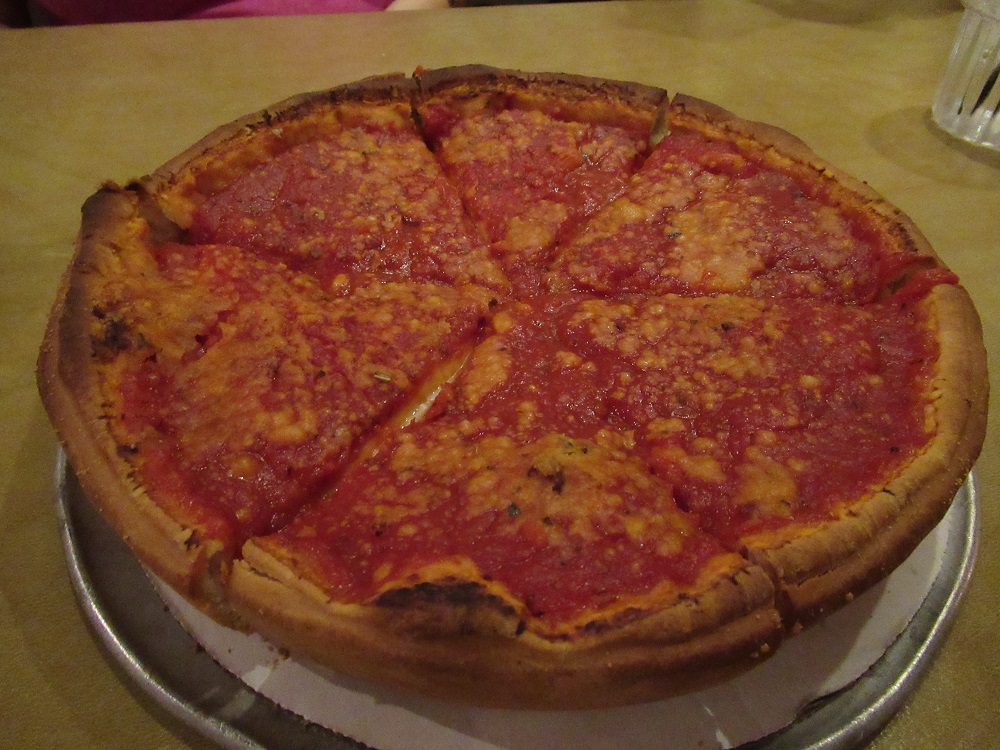 Our first stop was at Bella Bacino’s on Upper Wacker Drive. We opted for a stuffed cheese deep dish, but Bacino’s is also highly regarded for its “healthy” spinach pizza. Most Chicago pizzerias, including Bacino’s, use Wisconsin cheese. The quality of your cheese is more important than ever when there’s so much of it being showcased on your pizza.

Related: The difference between deep-dish and stuffed, along with more Chicago pizza history, can be found in PMQ's October issue. 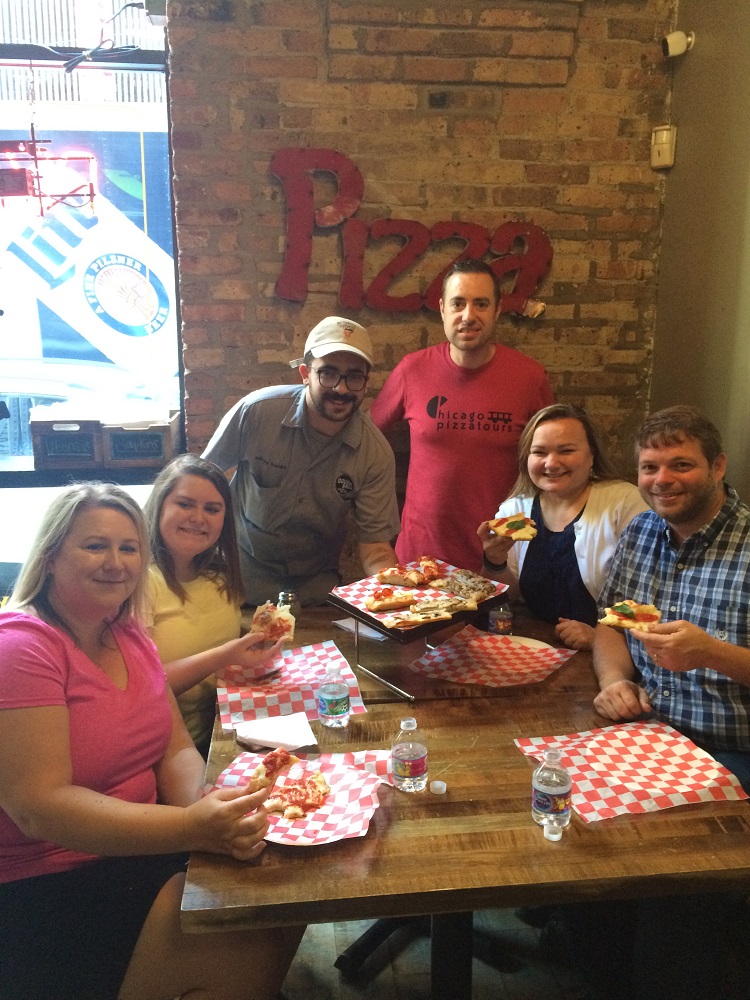 Next on our walking tour (thank goodness for a few steps between bites) was Dough Bros, where the company’s general manager Anthony “Professor Pizza” Scardino greeted us with two of his newest contributions to the pizzeria’s New York-style menu—Sicilian and Grandma pizza. Dough Bros has been serving up New York-style slices and sandwiches to hungry Chicagoans since 2014. 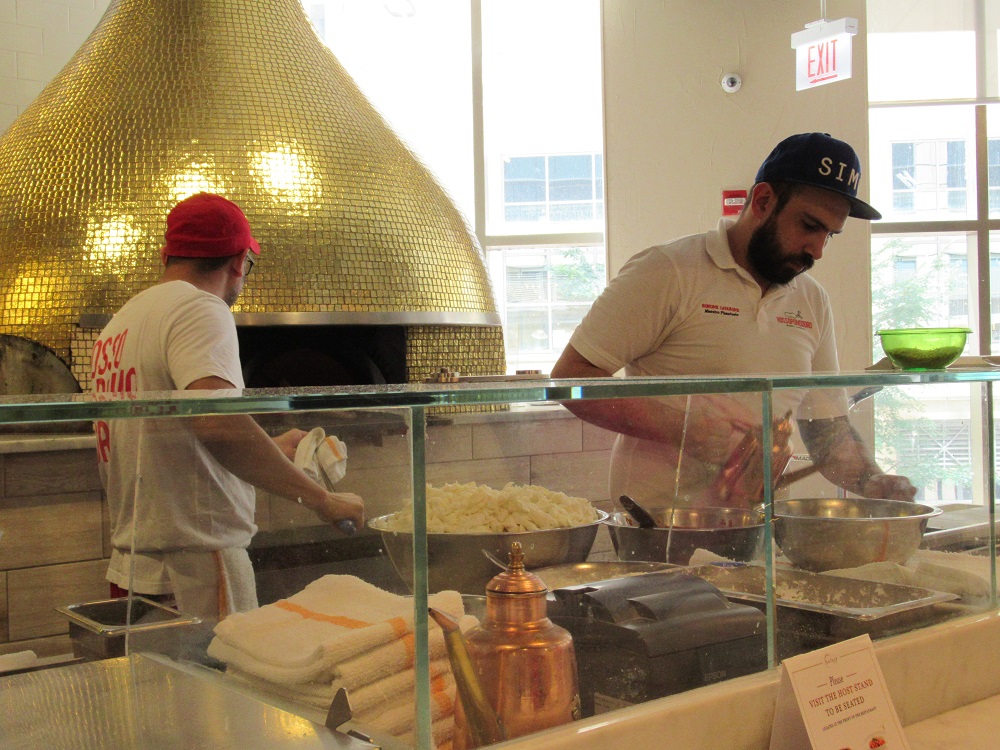 Eataly was next on the tour, with its gold wood-burning ovens and welcoming pizza bar calling us over. People don’t generally think of Neapolitan style when they think of Chicago, but Eataly chose to build its largest outpost in Chicago and, so far, the store has been a big success. We enjoyed delicate slices of margheritas before perusing the rest of Eataly, which includes a wide variety of retail nooks and eating and drinking opportunities. 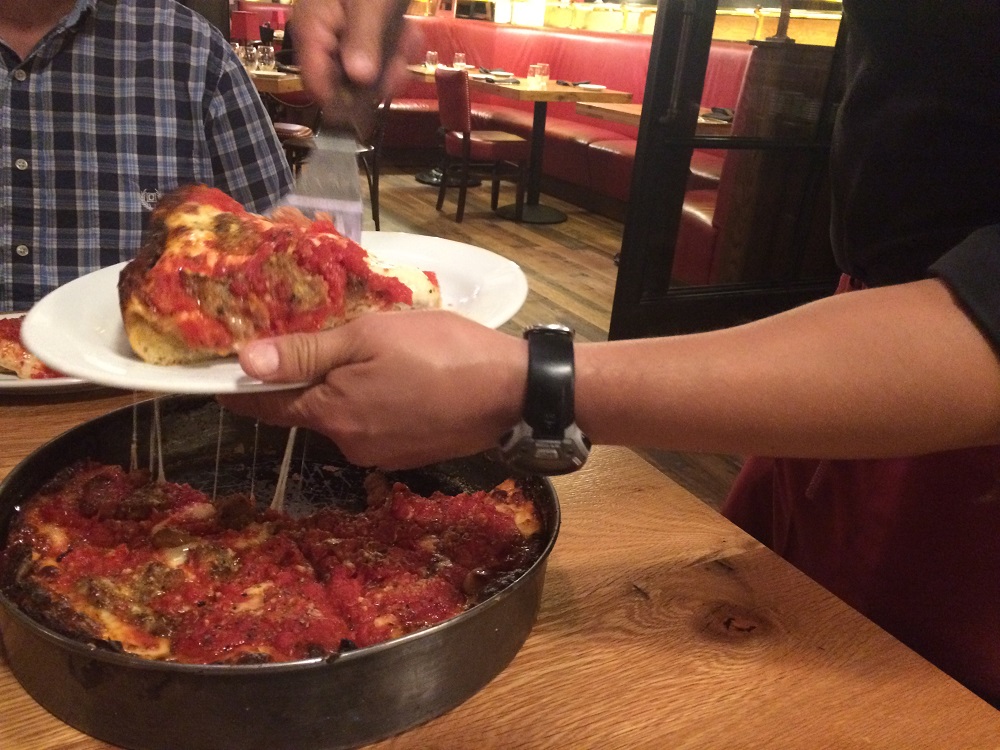 Last, but not least, we wrapped up the day with a deep and decadent pie at Labriola. Labriola Bakery has been supplying Chicago with fresh-baked breads since 1993, and owner Rich Labriola opened his pizzeria in 2015. When you taste the pizza, you can tell it comes from someone who loves bread. Our deep-dish sausage pie was rich, saucy, cheesy and had just enough sausage to make you want another bite.

It’s true that Chicago has become famous for its deep-dish pizza, and everyone should try it at least once. But, do yourself a favor and don’t leave Chicago without celebrating the many other fantastic pizza styles the city has to offer.

What are some of your Chicago favorites? Let us know in the comments. 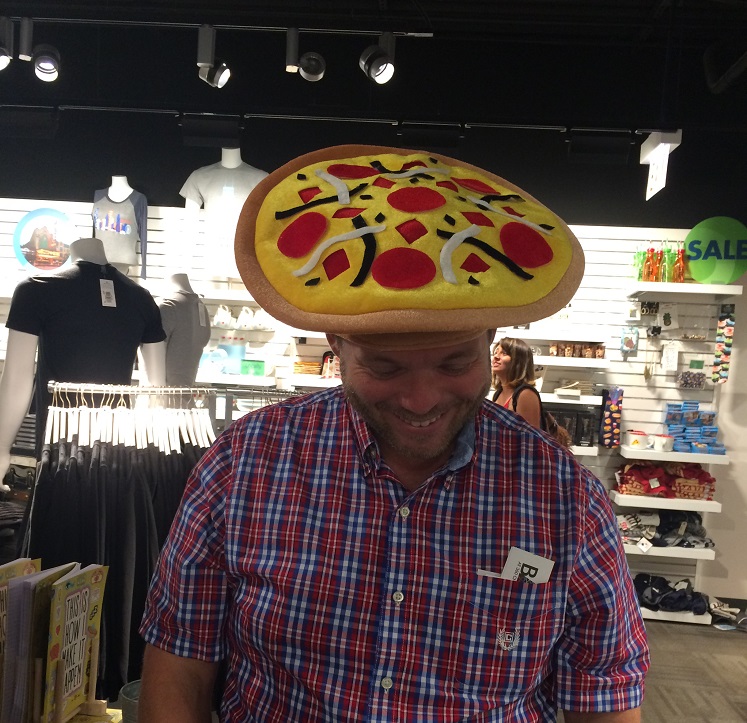