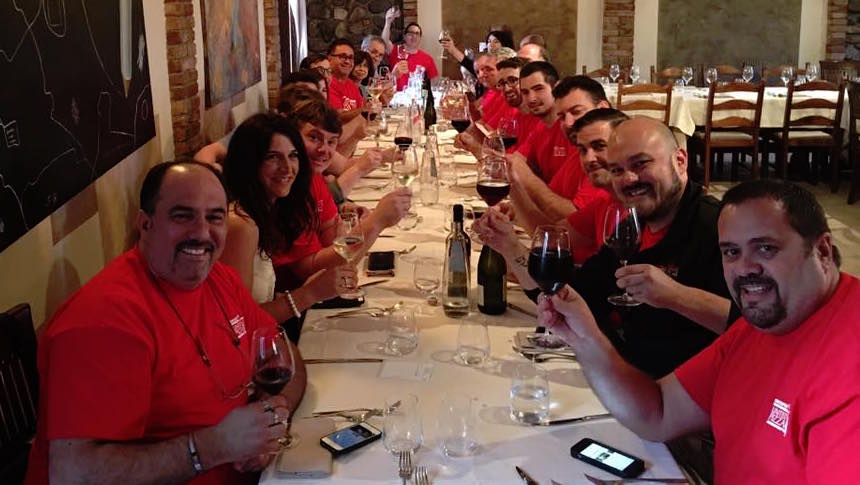 The U.S. Pizza Team has been venturing to Italy since the turn of the century.  In their 16 years of travel to the world's most infamous pizza country, they have uncovered some interesting surprises when it comes in dining out in Italy.  Here are 5 things you need to know about restaurant-going in Italy.

In Italy and Europe at large, the tip is already included as waiters and waitresses are expected to be well-paid for their work.  Also, there is less stress on being quick because the general dining experience is laid back.  Waiters in Italy are not accustomed to the level of service they give in the U.S.  Rather than coming to the table on their own, they will often wait for a person at the table to signal them over as to not hurry or disturb them.

Lunch and dinner are lengthy affairs so when reservations are made that table is booked for hours.  One evening as the U.S. Pizza Team was coming back late from a competition, we asked if we could cancel some of the reservation and free up a table for them.  The manager looked at me like I was clueless, "no one is going to come at this hour (8pm)."  Though 8pm is a perfectly standard time for Italians to eat dinner, the people of Parma rely on reservations because once a restaurant is full, the diners will be there all night.  So much for foot traffic.

Two things you need to know about toasting in Italy.  Toasting with water is bad luck so if you're with a group of Italians, make an effort to at least pour a sip of wine and fake drink it.  Secondly, as you bring your glass in and clink it when others, you must look them in the eyes.  Various European countries have superstitions about the 'consequences' of not looking another in the eye while toasting.  In Germany it could mean 7 years of bad sex!  In Italy and the Netherlands however, failing to make eye can mean a lack of respect or false friendship.

Though you don't have to tip in Italy, you may expect some extra fees with your meal.  This will be listed on the menu as coperto which means "place setting" and is usually  a fixed charge per person which can run between 1-5 euros.  Table cloth charges are standard in sit-down restaurants and normally include a basket of bread.  If you want butter or oil with the bread you'll have to ask for it.  As the U.S. Pizza Team translator Paola has warned us, 'Italians use butter for cooking, not to eat on bread.  If you want butter with your bread go to France!'

5. No coffee before or during dinner

Italians praise wine with food perhaps as much as they disapprove of coffee before and during your meal.  Coffee is specially reserved for after the meal as to not distort your taste buds.  Some waiters will even refuse to serve you coffee before the meal, doing you a "favor." PMQ Co-Publisher and coffee addict Linda Green was completely taken aback when she was told "no" to a coffee just before her dinner.  "I guess they don't want my business," she said.  In all likelihood, the waiter was probably hoping to enhance her overall tasting experience.  Just goes to show that "the customer's always right" is not a common saying around Italian restaurants.