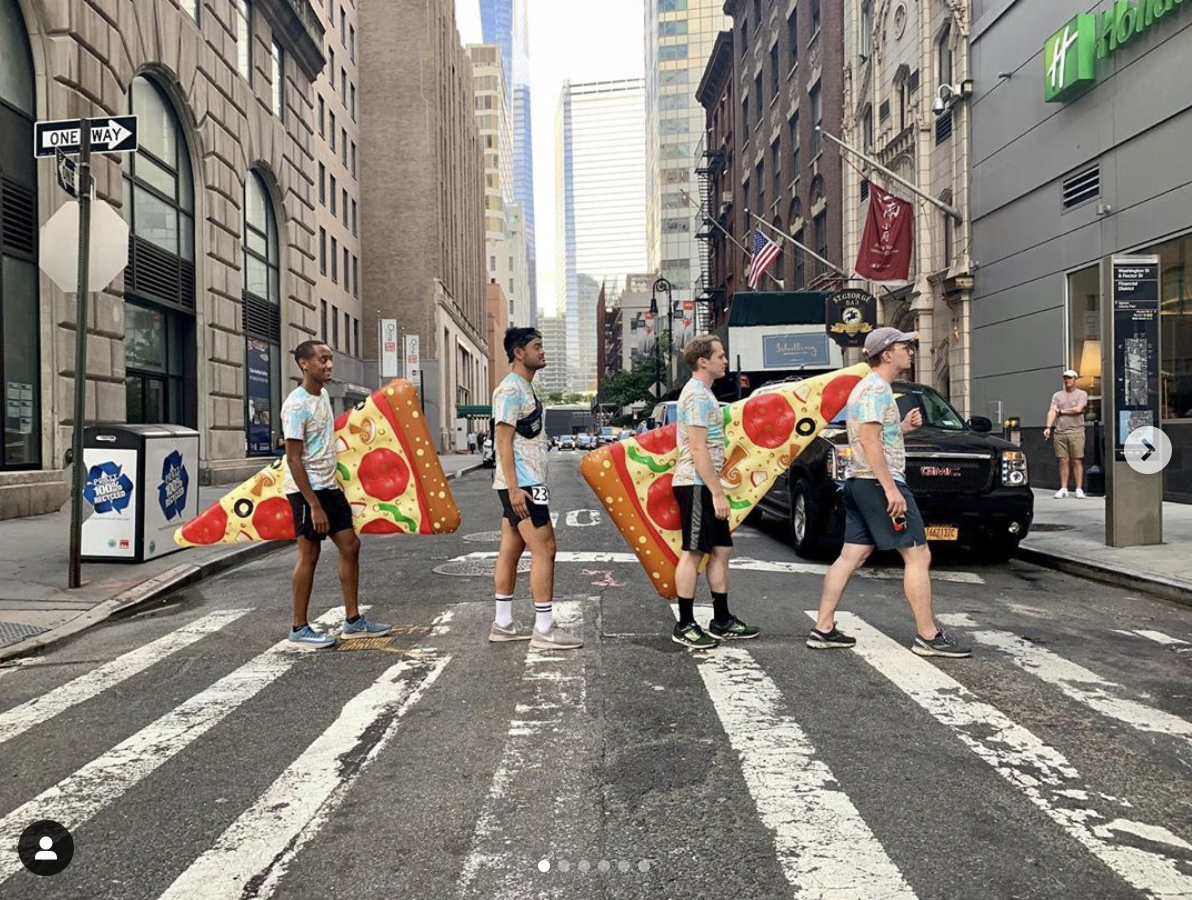 When one thinks of New York City, they imagine screeching, honking cars. Yet, those who actually live in the city don’t own a car.

“This is New York City. Most households are car-free, and the vast majority of New Yorkers don’t rely on a car for day-to-day travel,” said Joseph Cutrufo, who serves on the nonprofit Transportation Alternatives that has one goal: reclaim the packed streets from automobiles in favor of better walking and biking routes as well as utilizing more public transits for all New Yorkers.

And what better way to advocate for that than challenging people to find and eat pizza in all five boroughs of New York City? From Bronx to Staten Island, the 5 Boro Challenge competitors get to enjoy two original New York pastimes: getting around without a car, and eating pizza by the slice.

What are the rules? The participants receive a list of five predetermined pizzerias in Brooklyn, Queens, Manhattan, Staten Island and the Bronx where they will purchase and eat a slice. They then document it on social media with the hashtag #5boropizzachallenge. Then they go to the finish line which is a bar.

“Our volunteers check their photo evidence and if they’ve hit all five pizzerias, we give them a medal which is a bottle opener,” Cutrufo said.

The catch? No one is allowed to use a car, a taxi, or call an Uber or Lyft. “It’s not a challenge if you pull your phone out and get chauffeured from place to place,” Cutrufo said. So the racers must use the subway, buses, and even the ferry to reach a pizzeria in each borough. The five pizzerias are in no set order so the racers can figure out their best strategies in navigating all five boroughs.

“I have a lot of fun looking at maps and figuring out what would be a fun but challenging course,” he said. “I daydream about different strategies people might take. Each spring a group of friends and I do a version of this ourselves, where we’ll hit all five boroughs in a day. That annual adventure often yields some ideas for the event. We don’t race though — we take our time and have a beer at each stop!”

The five pizzerias change each year to keep the challengers on their toes. No one is given the pizzeria names until the day of the race.

“We’re always surprised what slices our participants like the best,” he said. “I try to ask everyone when they finish which slice they enjoyed most. This year a surprising number of folks said Paulie’s Pizzeria on Staten Island.”

This year’s winner was Scott Fitzgerald who finished the challenge in five hours and 15 minutes. “Most years, the earliest finishers take around five to six hours. Of course, because the stops change each year, there’s no real way to stack each year’s fastest finishers against each other,” Cutrufo said.

The idea came to Cutrufo six years ago when he and his coworker observed their own weekly tradition: “Pizza Wednesday.”  One day he asked his coworker if it was possible to have a slice in all five boroughs in a day, a typical question of a transplant that moved in from Boston.  His coworker replied it would be easier to do that with a car.

“To me that seemed silly,” Cutrofo said. “Why drive when you can take a boat, a bus, a bike, a train and make a whole adventure out of it. New York is the most multimodal city in North America — and the traffic congestion is mind-numbing. So in the spring of 2013, I asked a friend who’s always down for anything if he’d join me on a trek across the city to eat pizza and drink beer. ‘As long as I don’t have to plan anything, I’m in,’ he told me. We made it an annual tradition, and now we go every spring with a small group of friends.”

Then in 2016 Cutrufo joined the NYC Marathon to support Transportation Alternatives, a friend suggested that he should monetize his pizza adventure into an event for all to participate in. So with help of his wife, Shannon Moriarty, who he praised as fantastic at event-planning and logistics as well as the designer of the 5 Boro Challenge swag, he grew his little adventure from 65 participants in 2016 to over 125 each year since.

One day, he hopes that this challenge will help New Yorkers decongest the crowded streets by choosing to walk or travel en masse via public transit, maybe all the while enjoying one classic New York slice of pizza on the way.