4 For 1 equals one for all - PMQ Pizza Magazine 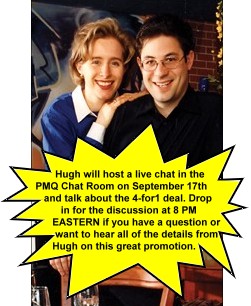 Pizza operators are constantly being challenged in one way or another. If it's not employee concerns, it's battling it out with the competition and the competition has many weapons to assist them in putting you out of business.

One of the most commonly used weapons in the operator's arsenal these days is price.

The price wars have caused too many headaches. It seems Domino's Pizza, Papa John's Pizza and Pizza Hut has set the standard price of a large pizza. They all offer a $9.99 or $8.99 specialty pizza, or, if you are in a really tight market, you are competing with their single topping offers that range from $4.99 to $6.99. How can you compete?

It's not that you have an inferior pizza. A pizza from the major chains is pretty standard. Independents have the ability to play with and perfect recipes or create with a new promotion at the drop of a hat. They can add any specialty or gourmet pizza to their menu at any given moment. If it doesn't sell, they can take it off the menu and try something else without going through the corporate chain of command. The way you win the pizza war in your local market is by setting yourself apart. You either do this with a superior pizza, unmatched customer service or offer something no one else does; find your niche.

If it's a price war you're dealing with, you can do one of two things; play them in their own game, which is not very profitable, or find a promotion that doesn't focus on price, but either quality or variety. If you choose to battle them on price you first have to put yourself on a level playing field. Offer the same pizza at the same price. You have to portion control the ingredients because one of those fifty-cent-per-pound changes in the price of cheese can put the hurt on. Plus, you cannot make money offering your large for $9.99 if it is an 18-inch and the competitor's is a 14-inch or 16-inch pizza.

That's where this story started. I began to see several posts on the PMQ.com Think Tank concerning 18-inch pizzas. "Should we keep these (18-inch pizzas) on the menu?" "How do I compete with a $6.99 large pizza offer when their large is 16-inches and mine is 18-inches?" Then I saw a post that caught my attention. 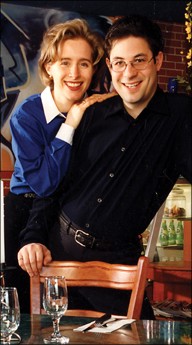 Hugh Philippin, owner of Pizza Magazine pizzeria (soon to change its name to Chic Alors, which is French for "Oh Boy!") in the suburbs of Quebec, Canada, made a suggestion that had several people asking questions. "We were in the middle of a price war," Hugh says. "We had to fight back and lowering prices didn't work. In order to compete with the two-for-one deals everybody else was offering, we decided to stop advertising the 18-inch pies and offer a four-for-one deal."

Four-for-one means four 8-inch pizzas for one price. The customer can choose four of any admissible pizzas on the menu and they will be delivered in one large 18-inch box. This approach allows each family member to get his or her pizza. Typically, kids will ask for a pepperoni pizza, mom will want a vegetarian pie and dad will get his all dressed with lots of meat!

"This special also allows customers to try a new pizza they were afraid of ordering because they won't bank their whole lunch on one type they are not sure of liking," Hugh says. "It's a lot like ordering the variety pack from Dunkin Donuts; there's something in it you are sure to like and some new things to try. With the four-for-one offer, customers are free to try new combinations with their old favorites. We specialize in complete gourmet pizzas, which means most of the recipes are set, such as the Mushroom Delight, The All Dressed with Smoked Meat, Vegetarian, etc." He says this works great for the four-in-one offer because it's like ordering by number instead of ordering each pizza's toppings a la Carte. Most of the toppings that are ordered a la Carte are ordered in the dine-in area. 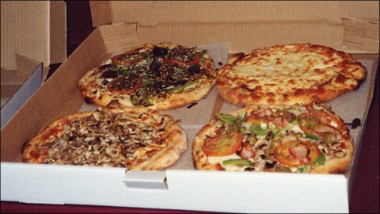 "The four-for-one deal accounts for about 40 percent to 50 percent of our take-out and delivery sales and about 25 percent of the total system-wide sales. We have two prices for the four-for-one offer. Our price for a four-for-one take-out order is $24 (Canadian), or about $16 in U.S. currency. For delivery, we add one dollar. If there are four people eating, this equals about a $4 (U.S.) meal."

Jeff Kik, owner of Lafayette Pizza and Grinders in Kalamazoo, Michigan, also offers a four-for-one deal he calls the World Tour Pizza Pack. "I used to own three Pizza Chef franchises and that's where the idea started for me," Jeff says. "We had eight signature gourmet pizzas and wanted to market them in a new area. Customers could order any four 8-inch pizzas, gourmet or regular, and a salad for $18.99. They sold really well and I still have the offer with my current pizzeria.

"At one time we ran a special where we would let them pick any three pizzas and add a special of the week pizza as the fourth. Fifty percent of our sales come from specialty pizzas. I believe the catalyst for the increased sales of our gourmet line was due to the Around the World offer. It (the Around the World offer) put us on the map and got great newspaper coverage from the editor for the foods section. Another thing that makes this offer attractive is it's also great for couples that go out together. Everyone doesn't have to agree on the same pizza." 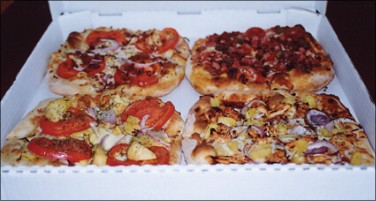 There's the good, now for the bad and ugly. First, Jeff says that the four-for-one offer can slow down phone transactions. He says what has helped them here is becoming really good at making suggestions. Jeff also adds that it can be a real pain for the kitchen on busy weekends. His pizza makers have to make four individual pizzas, which can slow down the process. When Jeff owned his Pizza Chef franchises, he used deck ovens, but now uses a conveyor oven. When using a deck oven, he says it's difficult for the oven tender to shuffle all of the pies and keep up with which pizzas go with what order. Jeff says the conveyor oven really helps in keeping the oven tender free. Hugh agrees by saying it's harder to custom build four pies in a rush. Jeff adds that the profit margin is probably a little better on a single large pizza. "If you are looking for a way to be unique, this is what has done it for us," Jeff says.

Both Hugh and Jeff say each of the pizzas that go into their four-for-one offers are not 'joined at the hip,' but made individually. In Hugh's restaurant, each pie is built separate and then cooked together on a 18-inch screen. "We don't want joined pizzas because I want the people to truly get individual pies," Hugh says. "We just treat them as a single group of four during assembly. People are so used to our deal they don't take longer to order, better yet, people hesitate less when they can order more than one type of pizza because they feel more secure with their favorites."

As mentioned previously in this article, Hugh says he doesn't offer the four-for-one in his dine-in area. He keeps the offer good for delivery and carry out only because the pizzas are boxed, which helps make the distinction between his par-baked crust and the fresh dough crust clearer. The idea of marketing the pizzas in the four-in-one deal as being 8-inch pizzas (even if they are really closer to 9-inches) is to distinguish both products as being very different.

"We don't want people to think the pizzas in the four-for-one are substitutes for the fresh, premium 9-inch pizzas we make," Hugh says. "We don't want to devaluate their perceived value. Just like Honda and Acura or Toyota and Lexus use the same platform for many of their vehicles, they are distinguished in advertising and aren't even sold in the same stores. Seating is at a premium at our dine-in area. We want our customers to experience our product under the best possible light and we expect them to spend a little more doing it.

"The lower scale pizzerias in our neighborhood don't offer dining rooms and when the four-for-one was invented, it was to level the playing field and offer a way for people to try our very diverse products. Because of the success of the four-for-one (even though low-grade pizzerias all but disappeared), we decided to keep it permanently on the take-out and delivery menu as a sampler and because it is so successful with families with young children (which do not eat at our restaurant so much anyway)."

Jeff does offer the four-for-one deal in his dine-in area. He says it helped by placing the offer at the top of his list of gourmet pizzas. The idea here is to get people to try other combinations without the risk of ordering a pizza that they may not like. Advertise this as a pizza that has something for everyone. It is also a great way to compete with those other guys who are killing you with cheap pizza offers as well as a way to gradually remove the 18-inch pie so you can compete equally with their smaller $8.99 and $9.99 offers if you want to get into the price war game.

Direct mail was one avenue Hugh used to spread the word of his four-for-one offer. While he says this was the cheapest and most beneficial way to advertise, having the menus created, printed and mailed was pretty intensive for him. He targeted 15,000 of the closest households and sent out menus. "When they're sent, there's no turning back as sales skyrocket for about three weeks," Hugh says. "You better be prepared and have a dependable staff."

Hugh tried newspaper ads, but said they bombed for him. He says that one good thing about newspaper ads is they get your restaurant critiqued or have a reporter do a column on the restaurant, but the downside is you have no control over what will be said. Right now Hugh tends to advertise by radio.

"Jingles haven't really worked well," Hugh says. "I have bought spots on this show where the deejay loves food. I told him to only talk about his love of food and tie it in with us. A live plug gives you more credibility. Many people come in and tell us they heard the deejay raving about the restaurant, and no one knew we paid for the spots. This type of advertising works best when it airs in the morning and during returns (5 p.m. until 5:30 p.m.). The four-in-one was marketed by direct mail first, but the radio spots worked well because the announcer explained the offer in detail. The four-in-one takes some explaining and people don't really want to read a bunch of explanations."

Jeff says he markets the four-in-one deal by distributing his menu in the form of flyers. "I am near a large campus (Western Michigan University). I target students on campus when classes are in session. In the summer I insert menu flyers in our local paper in my delivery zone."