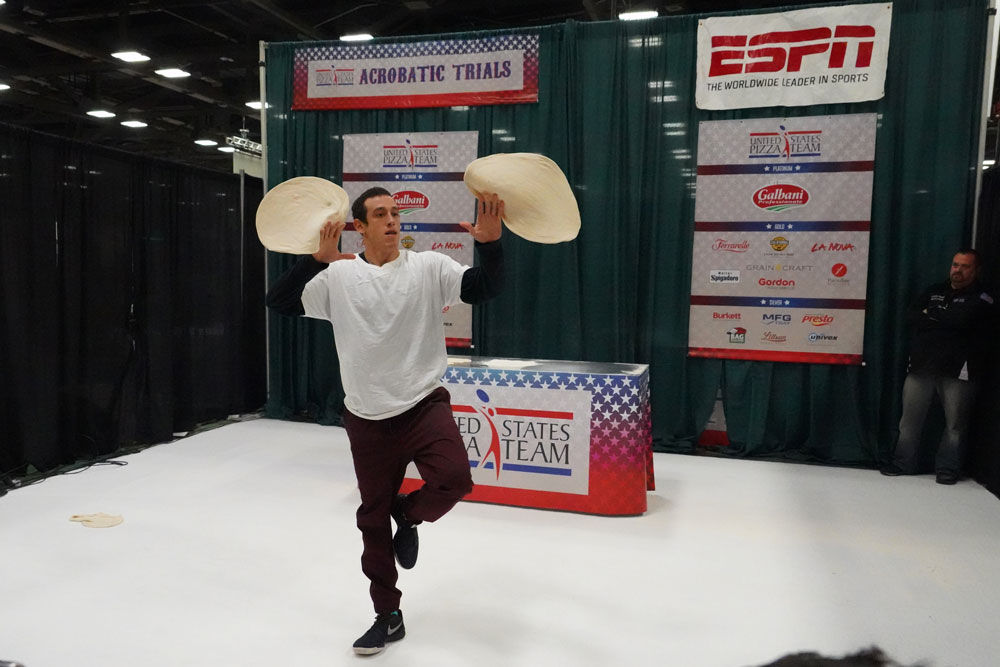 It has been a while since my noble visage shone gloriously from this page, but let’s be honest: You probably didn’t even notice I was gone. You didn’t miss me one bit, did you? True, my sabbatical was fairly brief, but a lot happened in my absence. Someone started piling pickles on pizzas. The civilized world was shocked to learn that Queen Elizabeth has quite possibly never eaten pizza—with or without pickles. And Tony Boloney’s in New Jersey debuted a pizza crust made of spaghetti noodles. We’ve got so much to talk about.

Of course, mad-scientist innovation in the pizza industry is nothing new. So we’ll put that stuff on the back burner for now and focus on the U.S. Pizza Team (USPT). Your friendly neighborhood dough spinners made 2019 a year to remember right from the start with their first-ever live appearance on ESPN3. The sports network aired this year’s USPT Winter Acrobatic Trials on January 14, with PMQ’s senior media producer Daniel Lee Perea and World Pizza Championship gold-medal winner Jamie Culliton calling the action like natural-born sportscasters. USPT coordinator Brian Hernandez, who organized the event and kept things running smoothly, also took center stage to present the awards and close out the broadcast. And for all their behind-the-scenes help, we owe a big thank-you to USPT members Dave Sommers of Mad Mushroom, with locations in Indiana and Kentucky; Lenny Rago of Panino’s Pizza in Chicago; Michael Reyes-Casanova of Ynot Italian in Virginia Beach, Virginia; and Ryan LaRose of The Osteria in Columbus, Ohio.

The Winter Trials were held at the Mid-America Restaurant Expo (MARExpo) in Columbus, Ohio. For both the team and the PMQ crew, the competition created memories that will undoubtedly last a lifetime. Our partners, Go Live Sports Cast, spearheaded the production with skillfulness and finesse and made it all look easy (although, I can assure you, these productions never are). And none of it would have been possible without the generous support of our USPT sponsors: Galbani, Molini Spigadoro, the California Milk Advisory Board, Paradise, Burkett, MFG Tray, La Nova, Grain Craft, Lillsun, Bag Solutions, Presto, Gordon Food Service, Ferrarelle, Univex and Fontanini.

We’ll share more detail about the Winter Trials and the promising future of the U.S. Pizza Team in our April issue. Until then, thanks again to all of those who made the ESPN3 appearance possible—and here’s to more success to come!